I mentioned in an earlier post that there was a bank holiday.  Normally in Spain the holidays are for some religious purpose.  August 15th was a normal day, but it was by night that the festival began!  I live in a flat overlooking Estepona ‘old town’ so I luckily had a brilliant view of the whole parade that went down ‘Calle Real’.  After a quick wiki search, I found that the Spanish, along with many others, celebrate the Assumption of Mary – otherwise known as the Virgin Mary’s heavenly birthday when she was accepted into heaven.  It went on for over an hour and the news showed that similar festivities occurred around Spain.  Some highlights (which you can see in the photo) include two brass bands, the men holding the statue of the Virgin Mary shouting “guapa, guapa, guapa” and women dressed as brides.

The statue of the Virgin Mary being carried through 'Calle Real', where people had lined the streets. and the second band following behind.

The whole street was full of people and there was an amazing atmosphere that was great to be a part of.  And that wasn’t even the biggest celebration – that happens in July, can’t wait to experience that one!

More recently, a few sales meetings took me to Gibraltar.  For those of you who may not know, Gibraltar – commonly known as ‘the rock’ is found between southern Spain and North Africa.  It is a British territory, so I was very much considering my little trip to Gibraltar as a potential cure for my home sickness.  After crossing the border, with lots of flashes of your passport, you pass the Gibraltar airport runways.  Literally, you can walk straight past the runways and you see the planes take off from the island very closely, which is pretty cool.

As soon as you look around you see ‘Winston Churchill Road’ and English signs everywhere.  The Gibraltarians have their own accent, something difficult to describe but interesting to hear.  And of course, you can see English everywhere – a language I understand with ease! J

After the sales part of the day, we treated ourselves to fish, chips and mushy peas from one of the many fish and chips places in Gibraltar.  It did feel a bit like home – with Burger Kind, McDonalds and Subway all in sight – but sitting in 37 degrees heat!  All followed by a cheeky visit to Morrisons to pick up things that are missing in Spain (big box of cereal, chilli sauce and a massive pack of Typhoo tea) and catch up on the English headlines (and I may have aww-ed when I saw the British currency – I do miss the Queen on my money!).

I took this trip with one of the directors of the company who’s also a photographer. This led to my next destination of Sotogranda, Cadiz where ‘locations’ were looked at, lighting was discussed and I suddenly felt quite glamorous.  We drove into Sotogrande on a road lined with palm trees – more LA, less promenade style.  At the end of the road was a roundabout with a Porsche sat on it – bit of casual advertisement of a PORSHE on a roundabout!  And I got to see some of the most amazing houses, flats, buildings, yachts, boats and views I have ever seen!  One of the things that particularly 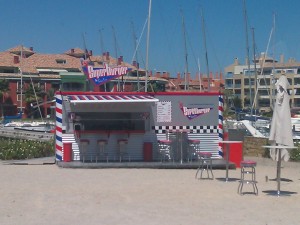 stuck out for me was an American style burger bar that you’d think would be out of place, but for some reason was completely fitting despite the luxury of Sotogrande.  A very glamorous place – I’ll remember it when I’m a multimillionaire looking to buy my third house…. well, we’ll see!

My first sight of Sotogrande which wow-ed me, near the 'Hippy Market'

And to top it all off, a sighting of a Spanish A-List celeb ended the

trip.  We saw the daughter of the Duquesa de Alba, who was the subject of the Flamenco show I saw see post ‘Tans, Flamenco and early starts’.  Like I said, Spanish A-list, so unfortunately I didn’t make the most of the experience, nor did I know who she actually was until we left.  But a brush with fame all the same!

A day of British treats, Spanish luxury and a touch of glamour – and all part of work!  A brilliant day which renewed a fresh burst of Spanish enthusiasm in me!

Another beautiful view of Sotogrande.